Will you be redeemed by wearing the Redemption ANC buds from the House of Marley? Likely not, but if you’re concerned about the usual Earth-unfriendly methods of making devices like this, you’ll probably at least walk away with a load off your conscience.

They’re not biodegradable, but they are made from recycled silicone, and House of Marley even found a way to work sustainable materials like bamboo and wood into the design. Along with their sound quality and general stylishness, that’s a good reason to be happy about these buds, but it may not take long before you start worrying about the shortcomings of some of the active noise cancelling and other features.

They make a good impression even when they’re in the charging case. The case itself is unfortunately bulky enough that it doesn’t fit easily into jeans pockets, but I kind of like its black, pucky body and the way it’s crowned with a square of bamboo. (It doesn’t hurt that House of Marley’s logo is pretty nifty, too.) When you combine the Redemption’s case with the colorful nylon USB-C charging cord it comes with, the whole package looks a little like something you might find on one of Etsy’s classier pages. 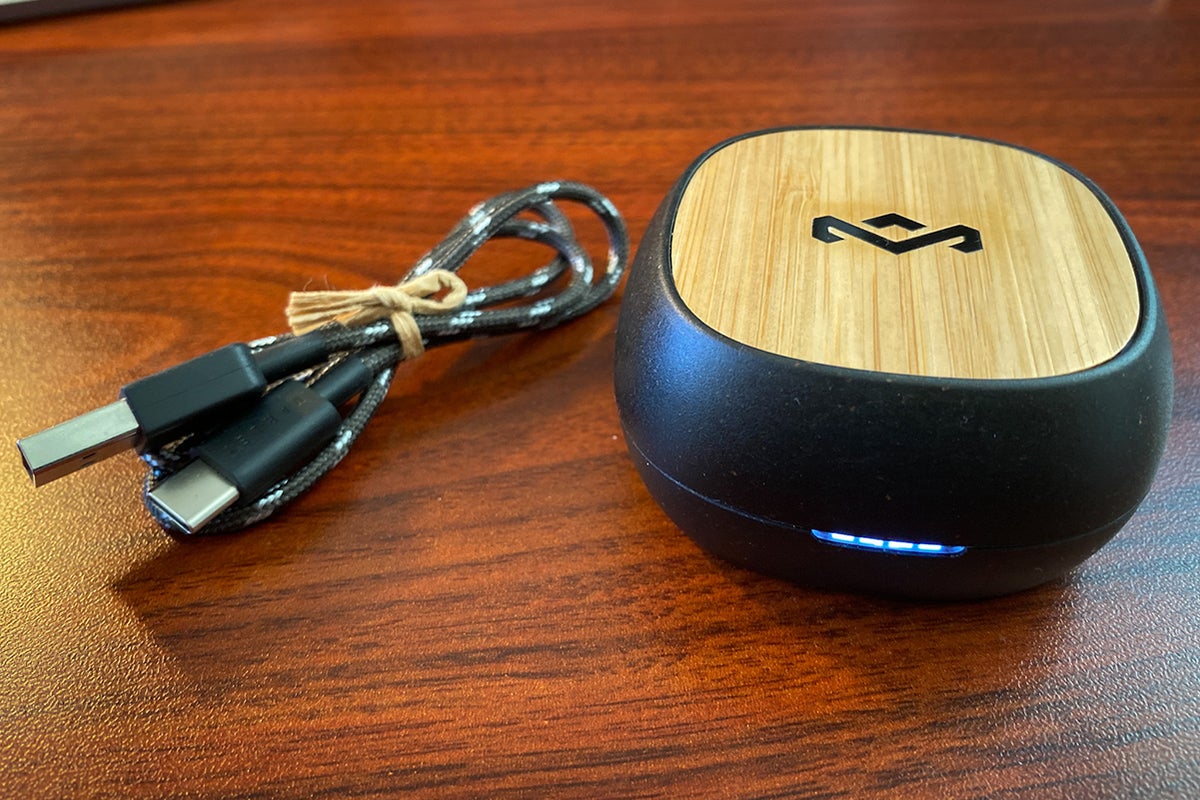 The Redemption ANC charging case next to the USB-A to USB-C charging cable that comes with it.

At least there’s sort of a good reason for that big case. The Redemption ANC buds can last an impressive seven hours on a single charge, and the case grants three more full charges. A row of four lights along the front ensures you always know just how much of a charge is left in the case, and on the back you’ll find the USB-C charging port itself, perched right above the Bluetooth pairing button. Pairing should be easy enough without it for the initial setup: I simply opened my iPhone’s Bluetooth menu, opened the charging case, and I immediately got a prompt to pair the individual buds.

I didn’t mind the hefty charging case so long as I kept it in my bag—but unfortunately, the buds themselves are pretty hefty, too. They look a lot like Apple’s first-generation AirPods aside from the black body and the wood running down the stem, but they’re also noticeably thicker. And that’s without the three different sizes of rubber ear tips they come with to help with the ANC, as well as a pair of wraparound ear fins that help keep them in place. I’ve always worried about my AirPods falling out even during a brief jog, but to my surprise, the Redemption buds stayed in even during a brief run down the block. They also have a water resistance rating of IPX4, so they’ll shrug off sweat from a workout but not a downpour on a rainy day. Still, they’re quite big. You’re never going to forget they’re in your ears. 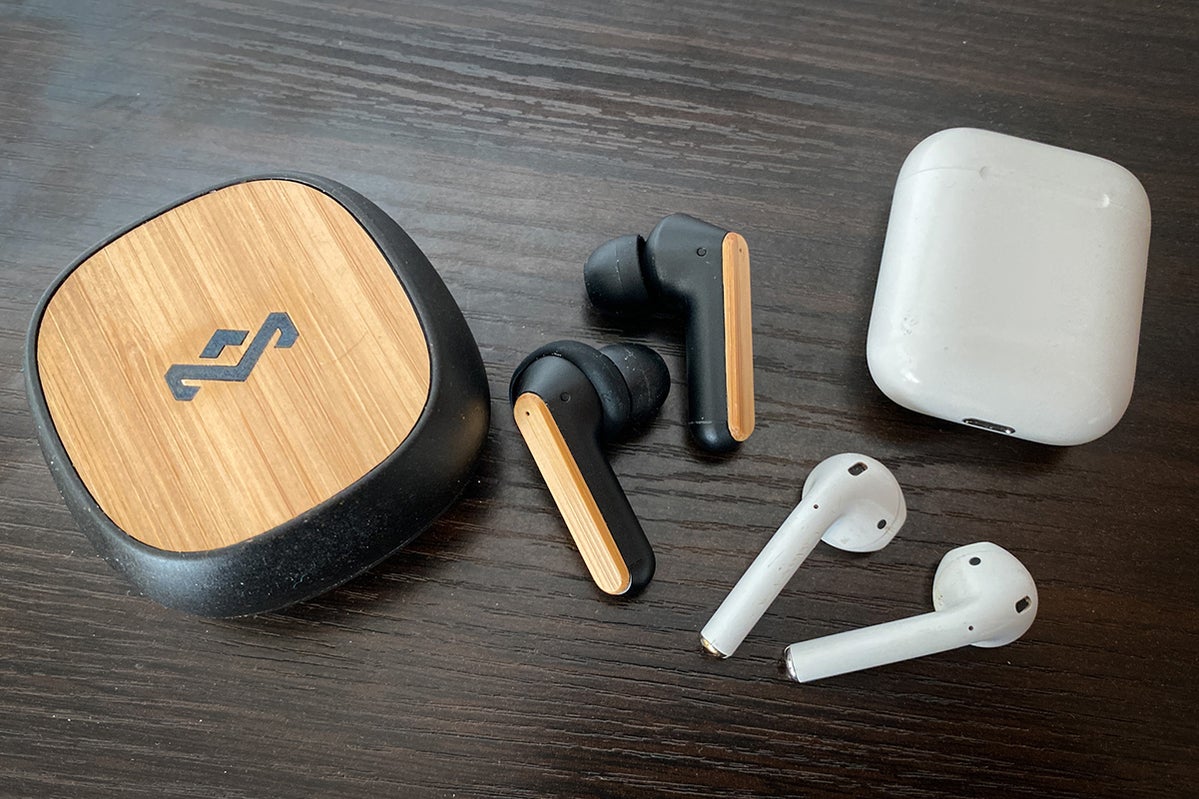 The Redemption ANC next to Apple’s regular AirPods for comparison. The Redemption case is also considerably thicker than the AirPods case.

Like the AirPods, you control the Redemption ANC through a series of taps on the stems. Two taps on the right stem plays or pauses your music, two taps also allows you to answer or end a call, and three taps let you skip to the next track on your music. (Sorry, you can’t use them to repeat a track.) On the left bud, two taps activate voice assistants like Siri or Google Assistant (depending on your phone), and two taps also let you decline a call. If you tap three times, you can turn on the active noise canceling, turn on the ambient mode, or turn both features off. Want to pause without pausing them? Just pull one of the buds out of your ears. Whew.

That’s a lot of info to digest, and a lot of it didn’t click until I went online and watched one of House of Marley’s instructional videos. Fortunately, it’s easy to learn the controls, but they’re not so intuitive that you’ll easily figure out their full range on your own without some frustration.

That said, you’ll probably end up frustrated anyway because of the finicky controls. At least a third of the time the Redemption buds interpreted my three taps for turning off the ANC as two taps, so I’d end up having an unexpected chat with Siri. I had similar troubles with the right bud when I was trying to skip forward to the next track. Even after several days with the Redemption buds, this never stopped being a problem.

And then there’s the actual noise canceling. It works, technically, but sometimes I wouldn’t have even known it was on were it not for the built-in British-accented voice confirmation. Frankly, the ANC I experienced with these headphones was about the same level of noise cancelling I might get from wrapping a T-shirt around my ears. Sounds that I’d normally expect to be muted by ANC—my desk fan, the cars going by on my street, and even the wind on my windows—still managed to sneak through regardless of which tip I wore. In other words, these are not earbuds for folks who like to use ANC buds while working in silence without musical accompaniment.

The “ambient” mode (which allows you to hear your surroundings as if you weren’t wearing buds) is a little more impressive, but the inferior quality of the microphone never lets you forget that you’re hearing your environs through a piece of hardware. After discovering this, I wasn’t too surprised when I called family and friends with the Redemption buds and was told the call quality was merely “okay.” 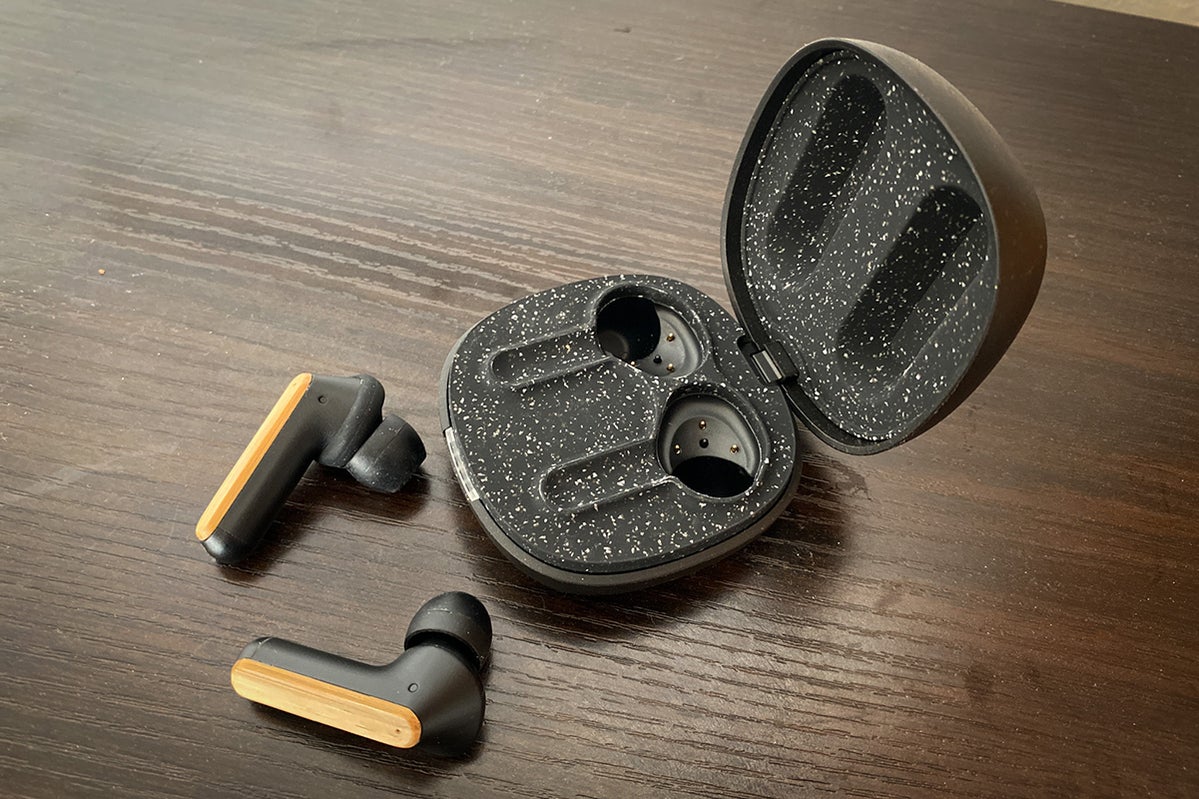 The Redemption ANC with the charging case open.

I’m happy to report that the sound quality of the music I played went a long way toward redeeming the Redemption ANC buds. It’s surprisingly impressive considering the disappointments of the ANC, especially if you’re a fan of tracks with heavier bass. Thumpin’ tracks like Billie Eilish’s “Bad Guy” or Of Montreal’s “Gronlandic Edit” resounded deeply through my head without smothering the songs’ middle and high ranges. On tracks with softer low ranges like The Rolling Stones’ “Sweet Virginia,” I was pleased to find the Redemption ANC buds hit the right degree of weightiness.

It’s enough to make me think House of Marley designed these buds with the assumption that you’re almost always going to be playing music when they’re in your ears. In those circumstances, the music is going to be doing the most of the work of the “noise cancelling,” and the weak ANC on the buds does pull some of the remaining slack. But only some. When the music stops, as it does for a second after the opening riff of ZZ Top’s “Just Got Paid,” I can still hear my desk fan chugging along. That’s not pleasant.

At $200, the Redemption ANC may seem steep, but for context, Apple sells its ANC-free second-generation AirPods at the same price. But even with the significant advantage of the ANC and sound quality, the Redemption buds are tough to recommend. For one, that active noise cancellation isn’t all that good, and the fussy controls and bulky size of both the case and the buds are already leading me to reach for other buds when I leave my apartment. Of course, if you’re particularly impressed with House of Marley’s environmentally conscious manufacturing efforts, these earbuds’ shortcomings certainly aren’t so great to dissuade you from considering them.

Note: When you purchase something after clicking links in our articles, we may earn a small commission. Read our affiliate link policy for more details.

AudioMoth: The Proverbial Moth On The Wall